‘The Bandits’ - St. Simon & Jude's own in-house band provided the music at this year’s annual Church Summer BBQ, on 8th July 2018. The Bandits as a band are now gaining in popularity and are being sought on a regular basis to support both our church and local community events.

The parishioners were looking forward to the band playing and entertaining us as a community again. The line-up on this occasion featured a few additional vocalists, three of these were parishioners.

It seemed that disaster had struck, there was an option to pull out and rely on piped music. However, the two remaining band members, Ben on keyboards and Bryan on drums made the brave decision to go-ahead and play on the day, supported by the three vocalists. 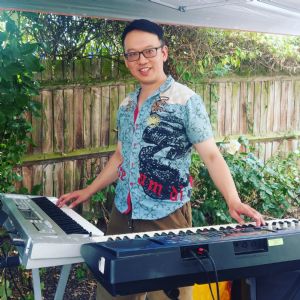 Despite the reduced 2-piece setup The Bandits ‘lite’ version, performed admirably, Ben, the pianist setup the stereo keyboards to replicate both a bass and guitar chords /sounds and also piano /keyboards. This hybrid piano/guitar/keyboard sound together with the drums and three vocalists blended and performed extremely well together, with no real reduction in sound or musicality, despite reduced instrumentalists on this occasion.

The benefit of having three vocalists for this event, meant that different genres of music were provided for over a few sets, with breaks between performances.

Gail the regular vocalist (featured in the last photo below, left) sang several well-known songs, for her set, and was ably supported by Ben and Bryan. 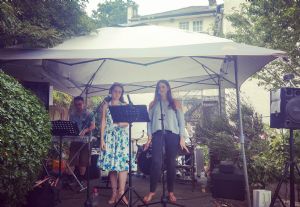 soul set that was well received.  Lydia, our choir soprano, with aspirations to sing soprano professionally, impressed the crowd with her rendition of Les Misérables and Gershwin's Summertime. Helen (Bryan’s wife) also sang.

Between sets, Bryan the drummer doubled up as the DJ, and played some cool summer grooves for those present. And Jamie our resident MC also wowed the crowd with his gameshow – ‘name the song and win a prize’. It is amazing the wonderful prizes Jamie continually provides for at these and other events at St. Simon and St. Jude R.C. over the past years.

Once the BBQ ended and after the band packed up, there was a chance to sit and relax with the two-member band over a few drinks and gain an understanding of the numerous rehearsals, hard work and effort it takes to pull together the band performance. 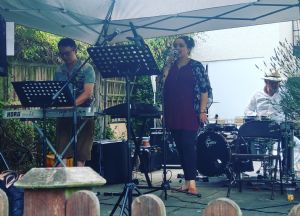 For this gig, Ben informed us, the band practiced around 10 hours of rehearsals and Bryan was tapping out rhythms with some wooden spoons even whilst on holiday, that is dedication and love of music!. We discovered that it takes thirty minutes to set up the drumming equipment another hour to set up the sound system and install the speakers, which weigh in at 24kg each, this adds a physical element to the band setting up. Then, post performance, it takes the same time, around, another 90 minutes is required to pack and cart the various cables and kit away.

The two band members shared some important lessons with us at the end of this gig - work hard, never give up, participate and do something new and the rewards for the community and yourself will be bountiful.

The Bandits will play next at Holy Redeemer Church's BBQ (15th July 2018) - an Anglican church - showing interfaith collaboration and the universal language of music and how it brings our communities together.

We say to this 'lite' version of  'The Bandits' - Thank you guys and gals! and looking forward to the full band compliment on stage when next you play and entertain us, vocalists included.