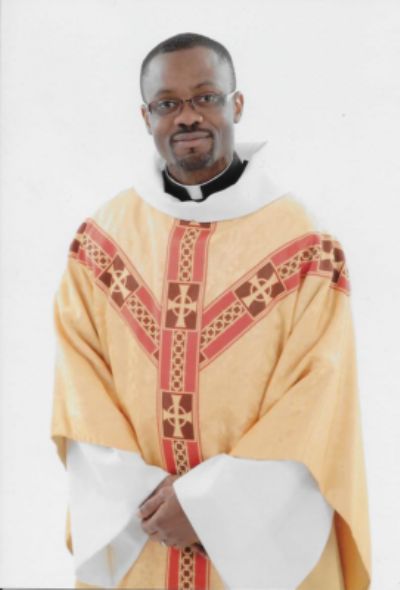 Rev Fr. Gregory Mario Verissimo was ordained on the 13th of July 2002 in Nigeria. He first studied in Sacred Heart Seminary, Port Harcourt, Nigeria, where he had initial formation in preparation for the Catholic priesthood. He completed his secondary education in Sacred Heart Seminary in 1991 and was admitted into Saints Peter and Paul Major Seminary, Ibadan, Nigeria. Here he studied philosophy and theology, and earned a bachelor’s degree in philosophy from the University of Ibadan and a bachelor’s degree in Theology from the Pontifical Urban University, Rome. He worked in parishes in Nigeria as well as in the Formation House of the Jospehites (Society of St Joseph the Worker). He joined the archdiocese of Southwark in 2008 as a Fide Donum priest and worked in the parish of St John the Baptist Purley. From here he went to Belgium to study Canon Law at the behest of Archbishop Peter Smith R.I.P. Father Gregory was appointed Parish Priest of English Martyrs Streatham in September 2017 after his return from Belgium.  He holds diocesan responsibilities in addition to parish ministry.  He is the Judicial Vicar of the Archdiocese and heads the Marriage Tribunal, he is also a member of the Archbishop’s Council.  He was appointed Parochial Administrator of SS Simon and Jude Streatham Hill on the 21st of October 2020 after Fr Lixson Cyriac OFM was recalled to his Province in India.